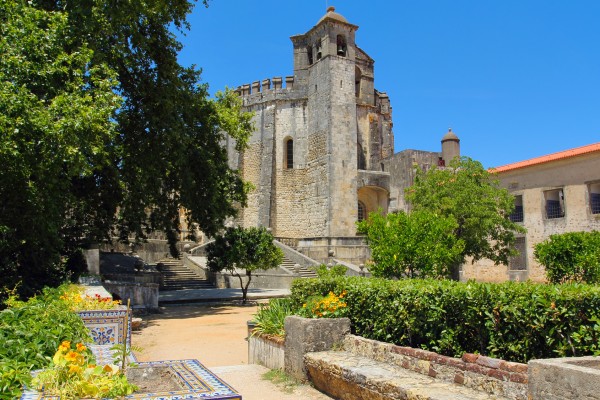 Who isn’t fascinated by the Knights Templar? Portugal is rich with Templar history and this day tour helps unlock their secrets.

Product added! Browse Wishlist
The product is already in the wishlist! Browse Wishlist
Share this
Join this tour to discover two of the most beautiful castles of Templar region whose military strategy was the most important during the Christian reconquest.

Our first stop will be the Almourol Castle. It is believed that the castle was constructed on the site of a primitive Lusintan castro that was later conquered by the Romans during the 1st century B.C. The castle of Almourol is one of the more emblematic and cenographic medieval military monuments of the Reconquista, and best representation of the influence of the Knights Templar in Portugal.

The journey proceeds with a visit to the Castle of Tomar integrating the Convent of Christ and that is certainly one of the most beautiful historical legacy of the Middle Ages in Portugal.Originally a Templar stronghold built in the 12th century. After the Order of the Knights Templar was dissolved in the 14th century, the Portuguese branch of the order was turned into the Knights of the Order of Christ, which supported Portugal’s maritime discoveries of the 15th century.

The Convent of Christ of Tomar is one of Portugal’s most important historical and artistic monuments and has been in the World Heritage list of UNESCO since 1983. We will also visit several interesting spots of the city of Tomar.

Lunch at the Medieval Restaurant a Taverna, a restaurant where medieval times are recreated. After lunch our journey proceeds Castelo de Bode Dam towards the village of Constância, a nice village near the junction of the two rivers Tagus and Zêzere, a very special place for its beauty.

8:30amHotel pickups commence prior to this time, you must contact the local service provider to verify your exact pickup time.

Inclusions:
Exclusions:
Additional Information:
Voucher Info:
You can present either a paper or an electronic voucher for this activity. What’s this?
Local Operator Information:
Complete Operator information, including local telephone numbers at your destination, are included on your Confirmation Voucher. Our Product Managers select only the most experienced and reliable operators in each destination, removing the guesswork for you, and ensuring your peace of mind.
SKU: 0a3826da01b3 Tags: Day Trips, Day Trips & Excursions, popular-tours.