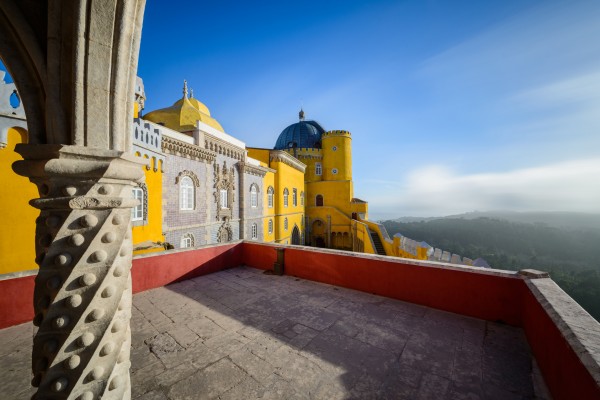 One of our favourites! And at a great value tour price! Sintra is breathtaking from the air so why not give it a go?!

Product added! Browse Wishlist
The product is already in the wishlist! Browse Wishlist
Share this
If your going to do it in style, do it in a helicopter! Sintra is probably one of the best sights to see from up above, so hop aboard this exclusive tour.
See the magnificent storybook palaces of Sintra from above on a private 30-minute helicopter flight from Lisbon. Once a playground for Lisbon’s royalty, Sintra’s lush hillsides are home to several extravagant royal abodes. Witness the architectural icons in all their glory as you soar through the air, passing the candy-colored Pena National Palace and the remarkable 18th-century Queluz National Palace, which is often compared to Versailles. Travel in style and comfort on your own private flight.

Choose the departure time most convenient for you, then make your own way to a heliport situated near the iconic Belém Tower in central Lisbon. Meet with your private pilot, take your seat inside the helicopter and prepare for takeoff. As you rise up toward to clouds, enjoy a bird’s-eye view of the city below.
Marvel at the scenes on the ground from the window as your pilot steers you out toward the magnificent Queluz National Palace. Look down upon the rose-colored structure, an 18th-century architectural masterpiece that was originally built as a hunting lodge. It’s famous for its royal gardens, which are peppered with various ornate statues and fountains. Admire the meticulously landscaped grounds from a totally fresh perspective.
From Quelez National Palace, fly deeper into Sintra passing over the gloriously green wooded hills and valleys, which are dotted with stony ruins and turreted palaces. Hover over the impressive Pena National Palace, an astonishing fairy-tale structure situated in the beautiful surroundings of Sintra-Cascais Natural Park. From an aerial vantage point, you can appreciate the unique landmark in all its glory.
Pena National Palace sits high on a forested peak and is painted in various pastel shades of pink and yellow. Look our for its numerous whimsical design details, which include onion-shaped domes, a drawbridge and gargoyles.
After 30 minutes of exhilarating sky-high sightseeing, make your descent back in Lisbon, touching ground back at the heliport.
Departure Point:

All flight times are approximate and subject to change due to weather conditions and weight restrictions.

Inclusions:
Exclusions:
Additional Information:
Voucher Info:
You can present either a paper or an electronic voucher for this activity. What’s this?
Local Operator Information:
Complete Operator information, including local telephone numbers at your destination, are included on your Confirmation Voucher. Our Product Managers select only the most experienced and reliable operators in each destination, removing the guesswork for you, and ensuring your peace of mind.
SKU: 0149770e0635 Tags: Air, Helicopter & Balloon Tours, Helicopter Tours.