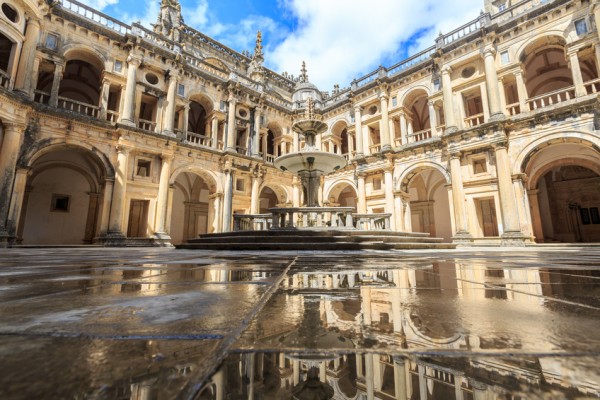 Walk in the footsteps of the Knights Templar in this wonderful trip to their heartland in Portugal, Tomar.

Product added! Browse Wishlist
The product is already in the wishlist! Browse Wishlist
Share this
An amazing full day guided tour. The settlement of the Knights Templar took place very early, before the constitution of the Kingdom of Portugal in the 12th century. With the first monarch, King Afonso Henriques, the land donations made to this order will be strategic: at the forefront of the Christian reconquest.

Considered the most Templar among all places, the region of Tomar was donated to the Templars around the year 1159. Later, when the extinction of the order was declared by the Pope, Portuguese King Dinis, the sixth of Portugal, negotiated the creation of a new military and religious order – the Order of Christ – to which he transferred the assets of the Templars. Some centuries later, the human and economic resources of this order will be crucial for the outset of the Portuguese Discoveries, under the command of its Grand Master, Henry “the Navigator”.

Many other famous historic figures were linked to the Order of Christ as Pedro Alvares Cabral (the discoverer of Brazil), Vasco da Gama (the first European to reach India by sea, connecting Europe and Asia for the first time by ocean route), Bartolomeu Dias (Portuguese explorer), Francisco de Almeida (first viceroy of the Portuguese State of India) or Ferdinand Magellan (Portuguese explorer responsible for the first circumnavigation of the Earth).

Inclusions:
Exclusions:
Additional Information:
Voucher Info:
You can present either a paper or an electronic voucher for this activity.
Local Operator Information:
Complete Operator information, including local telephone numbers at your destination, are included on your Confirmation Voucher. Our Product Managers select only the most experienced and reliable operators in each destination, removing the guesswork for you, and ensuring your peace of mind.
SKU: 17008P9 Tag: Private & Custom Tours.